Covid Operating Procedures - See how we're serving our community at this time. 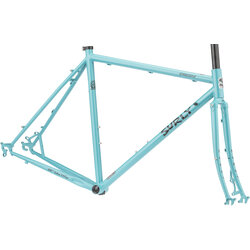 Surly Straggler Frameset 700c
$630.00
Straggler is a bikepacking-inspired road/gravel bike mostly at home on pavement but ready for trail duty when called. Born on Gravel. Raised on Pavement Straggler is tuned for cross-over exploration on a wide variety of terrain conditions. It's a day-tripper and a weekender. It's a "rough road" road bike, a cyclocross bike with no pretense about racing, a utilitarian townie, a light-duty touring bike and an all-weather commuter. It's a steel gravel bicycle that thrives on the road. Think of it as a "mountain biker's road bike." If you only have room for one bike in your life, Straggler can (and should) be your one and only. Straggler's capabilities go well beyond asphalt. It also lends itself well to light touring setups. We're talking frame bags, seat bags, and "credit card touring" rather than full-blown touring. Straggler also handles our 8- and 24-Pack Racks well, so you have some heavier-duty loading options. - Accommodations for racks and fenders - Forward-exiting horizontal dropouts for singlespeed compatibility and wheelbase adjustability - Clearance for 700c x 41mm tires with fenders! 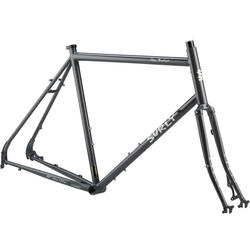 Surly Disc Trucker Frameset
$575.00
Surly's Long Haul Trucker enjoys a reputation as one of the best riding and most value-packed touring bikes out there. It's been around long enough to be tested in the real world, in all kinds of places, with all kinds of loads on all kinds of roads. Sometimes, however, a combination of load, climate and terrain demands a bit more braking performance than a standard rim-brake LHT can provide. That's where the Disc Trucker comes in. Disc Trucker is a Long Haul Trucker specifically designed for the unique forces discs impose. Surly made sure it can run discs, racks, and fenders with no jury rigging, a somewhat unique feature they've just now decided to call Simulpatibility. You'll need to outfit it with the extras you want, like fenders and racks. Surly doesn't include that stuff because everybody's needs are different. From the casual commuter to the person who rides around the world more than once, the Disc Trucker is more than capable. It's a tool designed from the ground up to take you and a bunch of stuff just about anywhere you'd like to go. It is a tool to help you get lost and find yourself. 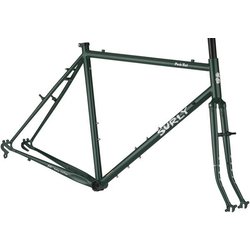 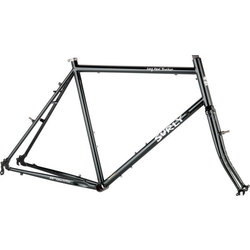 Surly Long Haul Trucker Frameset
$515.00
Travel to the ends of the earth on Surly's Long Haul Trucker! Surly's chromoly frameset offers a stable, smooth ride — even when carrying a load — and it's designed with pannier clearance so you can bring along all your gear! There are also cantilever-brake posts and braze-ons for mounting everything from bottle cages and fenders, to front and rear racks (standard or low-rider). Load your Long Haul up, hit the road, and see the world. - Fender eyelets, pump peg, downtube lever bosses, three sets of bottle cage bosses, rear housing stop for canti brakes - 4130 chromoly lugged and brazed fork; proprietary sloping crown with threaded eyelets in four locations: dual dropout, mid-blade, and a pair drilled right into the fork crown - Massive chainring clearance; use pretty much anything: 42/53t double, 38/52/56t triple - 100% Surly 4130 chromoly steel frame; main triangle double-butted - 26-inch: Clearance for 2.1" with or without fenders; - 700c: Clearance for 42mm with fenders, 45mm without fenders - Individual tire and rim combos affect tire clearance - Frame is ED Coated for increased life expectancy
Page 1 of 1